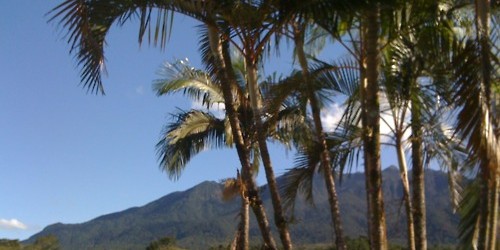 So I’m standing in line to buy my bus ticket today, and a blind man with a cane and a smile is laughing and cutting to the front of the line with a blind woman in tow.

He’s bumping into people and laughing, and instantly I “get” him.

This is what it’s like for me these days making my way in new cultures where I don’t speak the language.  Especially here in Brazil.  It’s all play and I’m bumping into people (metaphorically) with a big smile and laughter.  Everyone looks at me and they don’t quite get me… I’m an anomaly, just like the blind man.  I tell people of my life and how I move in the world, and it’s fascinating to them and they are inclined to smile and laugh with me, and I am inviting them into something new and different, something outside their everyday realm of what’s possible.

I looked at the blind man, so affectionate with the woman he was with, so much to laugh about… he’s in control of nothing.  His every moment is an adventure.  How ridiculous is his existence?  How full of wonder and joy.

And he needs people. He starts walking and bumping into people and things with a smile on his face, and people smile and help him out.  Gladly they help him.  He brings a smile to their day.  He doesn’t *need* any one of them to “help” him, he just moves in the world in a connective, trusting way.  He’s not needy, but trusting.  He’s a walking invitation to connection.

I watch him at the ticket window.  He is cracking jokes the whole time, and then grabs the ass of the woman he is with.  She smacks him and he laughs and puts his arm around her.  He probably doesn’t know there’s a whole line of people watching him… or maybe he does… maybe he’s “on stage.”

This cat is on more of an adventure than me!  But in a sense I am blind.  I am guiding myself by different senses.  I’ve come to realize how much I see with my eyes (and mind) is just not what my life experience programmed into me.

When I leave my friend’s house in Joinville (I’ll call him Joao) and set out on a walk around town, he tries to give me his GPS.  I don’t want it!  What an adventure killer!  What need is there then for meeting people and needing people?

Joao is a very responsible, caring father figure, who’s only looking out for me.  But that’s not how I’ve ever moved in the world, and I don’t care to start now.

He took me to a mountain the other day, and told me about an all day hike that takes you up to stairs built into the mountain side by the Incas or Mayans (forget which), and I tell him I intend to return to do that hike.  He tells me I can’t do it alone, says I need a guide.  I ask why.  “Because,” he says with authority.  I ask are there wild animals that could hurt me.  No, he assures me, although there are pumas, wildcats and more, he says I need a guide because I might get lost!

Hahaha!  I’m in brazil just following invitations, traveling the world often with less than $200 to my name, sometimes with $0.  I AM Lost in terms of his world view!  I am WAAAAAY off the beaten path.  My life does not have a destination or a beaten path!

Maybe I should wait to travel… wait until I have saved all the money I’ll need to travel without needing people to ask people to help me… Wait until I can pay for guides, hotels, GPS, etc.  So that its all safe and figured out and responsible.

A few weeks ago I read about three kayak adventurers who kayaked down a river in Africa full of crocodiles.  A crock snatched one guy from his kayak and the other two guys escaped with their lives.  It was funny to read the comments on the web page with this story.  People criticized these guys, saying that’s what you get for being so stupid, careless and irresponsible.

What a way to go!  Snatched from your kayak by a man eating croc while braving the most dangerous river in Africa!

So many people at the bus station today… so serious and in a hurry to get where they were going… THINKING they can see the world, THINKING they see other people… and then this blind man bumps into them, laughing… with his blind gal in tow.  And then maybe they get a glimpse that there’s a whole world they don’t see… a world where knowing where you are going is not so important.

There’s a magic to heading out into this world with trust… not trusting that nothing “bad” will happen.  But trusting in life, trusting in people… and guiding oneself with different senses than the eyes and the mental maps that have gotten us where we are so far.

My old mental maps tell me that young men who dress and posture to make themselves seem more physically dominant and imposing, and who also don’t look at me or smile or look down on me–that such men are a threat.  As a blind man I discover this to be so untrue.  Greeting them with trust, a smile and an invitation to connect in their native tongue, making me vulnerable on three levels, I am continually surprised to discover that the world is full of great guys who are just posturing to protect themselves from other guys who might be a threat.

The blind leading the blind.  I can’t really say I have any blind folks to lead… but maybe I’m almost halfway there… I am seeing what I couldn’t see before, more and more and more.

In the new world I inhabit, the information my eyes (and mind) feed me are useful mainly for laughter material.

Michael Ivan Skye, founder of VisionForce and a body of transformational work including iStand and the Honor Window, is experimenting with new ways of living life and offering his work in different cultures.
Copyright © 2011 Michael Ivan Skye, All rights reserved.
Share