Stepping off the plane from Cairo, nearly everyone is wearing traditional Middle Eastern clothing. Based on the news media from the US that I’ve grown up with, I’m very curious about how folks with receive me as an American. The Saudis, I learn are the ones wearing the red and white checkered headdresses. And aside from one Saudi man, they pay me little attention. But the glare I got from the one Saudi man was… not too friendly.

Later I arrive in Kuwait City, Kuwait  on the Persian Gulf, about 25 miles from Iraq and 25 miles from Saudi Arabia. This tiny country sits tenderly on 10% of the world’s oil reserves. You heard that right. So the government owns the oil and other natural resources, and there is no income tax here. NO TAX -AND, get this, the government GIVES CITIZENS CARS, HOMES, MONEY, etc., for free. Not a bad deal, eh? But of course, unlike Brasil, it is very, very difficult to get Kuwaiti citizenship.

Of all the traveling I’ve done over the last few years, no immigration authority has been as nonchalant or lackadaisical as the Kuwaiti’s. It was almost as simple as flashing my American passport. Apparently, it’s a reflection of the gratitude they feel for the Americans saving them from Saddam during the Persian Gulf War. The catch is, if you’ve got a stamp from Israel, they won’t let you in… and this is true, apparently, of many Arab states. So, if visiting Israel, one might want to ask them not to stamp your passport.

So, I’m picked up at the airport by a woman I met through the CouchSurfing web site a few weeks earlier, Miss ExtremeDreamer, Laurie Santos. She tells me that if you, as a non-Kuwaiti, want to have any kind of social life in Kuwait, you either have to be visiting the American Embassy quite a bit or be an active member of the local CouchSurfing community. I would soon find out what she meant, but tonight I sleep.

It’s early Saturday morning, the last day of the weekend in the Islamic calendar and I’m awakened by a strange sound… someone was singing in Arabic and it was echoing through the city via loudspeakers. Turns out it is the Muslim prayers, which ring out six times a day. (I heard the same thing this Spring in Dar Es Salaam, Tanzania, which is predominately Muslim.) The guy here who does the prayers, which sound like singing, has a pretty bad voice on a musical level. Laurie tells me that the Kuwaitis often outsource the prayer singing to non-Kuwaitis (even non-Muslims?). 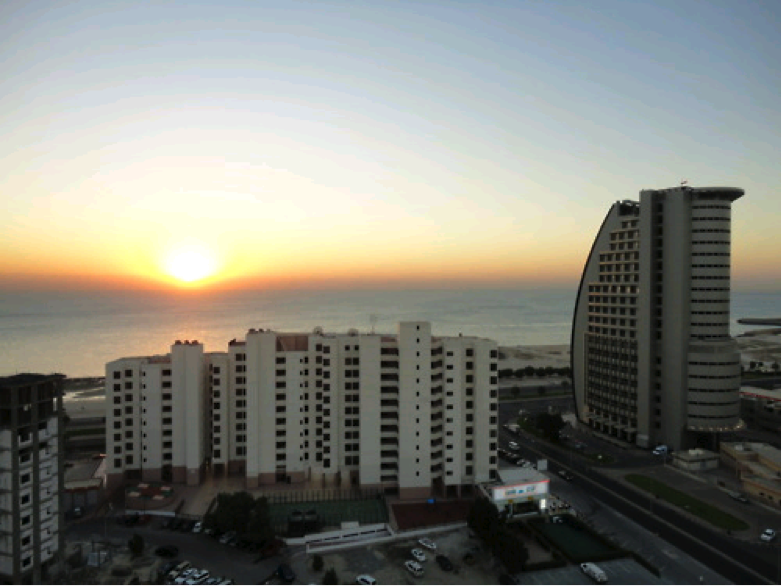 After watching the sunrise over the Persian Gulf, I join my host, Laurie, for brunch with a group of her friends, most of whom work with her. Considering my cultural naiveté and propensity for quick generalizations, I never would have guessed that I would witness what I did today. Before too long, I would see the young Muslim women who showed up in their hijabs (head scarves) blowing away some of my stereotypes:

After the restaurant, one of the Muslim girls drove Laurie and I home to change clothes. We get in the car and the Muslim, wearing her hijab, girl puts on her shades, cranks up Dr. Dre and starts rapping! Not kidding! Words like “bitch,” “beefcake,” etc., were flying out of her mouth. I was like, Where is my video camera!!! You had to see it to believe it.

Next, to the SeaDoos! For this gang, jet skiing in the Persian Gulf is a regular past time. Renting high powered SeaDoos for 30 minutes is only $10 Kuwaiti Dinar (about $30 US), and that’s what we did. The girls didn’t bother changing into bathing suits, as it’s contrary to custom and culture to show too much skin. Imagine–fully clothed Muslim women racing for the SeaDoos… seven reckless (rebellious?) riders racing through the water – these guys and gals were CRAZY!

There was one wreck and another girl who fell off the back of another SeaDoo, while racing me, and nearly drowned with her hijab on. I, of course, rescued her, put her on the back of my sea horse and rode her to shore, like a true Texan cowboy. It’s amazing how far the whole Texan thing goes with foreigners. It’s fascinating to them, so I play it up!

And that was just the beginning…

Later that evening, I head downstairs and around the corner to a small convenience store to pick up some basic groceries.

Turns out they don’t take credit cards and I was out of cash, so… the store owner offered me a ride to the ATM. He doesn’t speak English too well, and I had a few warning signs going off. I’d hesitate to just get in the car with someone in the US offering me a ride to the ATM to get cash, let alone in the Middle East. Many of my family and friends had felt quite nervous about my choice to come here, and perhaps considered me a bit naïve for doing this very kind of thing—trusting too much.

I sensed he was a genuinely nice guy. Turns out he’s Iranian, a citizen of a country that belonged to Bush’s Axis of Evil. The ATM denied my card, and he insisted we go to another bank across town. We talked on the way, as I continued to wonder if I wasn’t being too trusting. I make out from his broken English that he doesn’t like Kuwait too much, and that each Kuwaiti citizen acts like an individual government… something like that.

Most of the people here are from somewhere else, such as Lebanon, Iran, Jordan, India, US, France, UK, etc. And if you’re not Kuwaiti, you’re kind of a second class citizen. So, my new friend says his country, Iran, was “so-so,” and complained that it was difficult to change anything.

At the second ATM, I realize I need to transfer money before I can withdraw. So ultimately I have no cash to spend at his store. I feel bad, because he has gone to such lengths to help me get cash. But back at the store he tells me to take whatever I want and pay later. I’m like… “Huh??” The dude has never met me before and I’m from the other side of the world. Sweet… so, I load up on non-alcholic beer (the only kind available) and chocolate and skip town! Just kidding.

A month later I am about to leave Kuwait and I stop by this man’s store to say goodbye. “Take something please,” he insists. He wants me to take something from his store as his going-away gift. I’ll most likely never ever see this man again—I haven’t done much more than shop at his store on occasion—and he wants to GIVE me something.

If there is one thing I’ve been learning on my travels, the world is full of good people, kind people, generous people.

Michael Ivan Skye, founder of VisionForce and a body of transformational work including iStand and the Honor Window, is experimenting with new ways of living life and offering his work in different cultures.